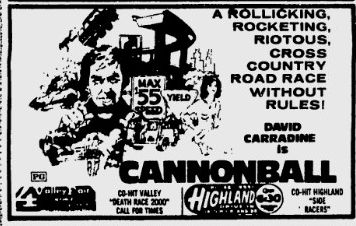 Here's an ad for Cannonball! from 1976. David Carradine plays an ex-con who signs up for an illegal outlaw road race that starts in Santa Monica, CA and ends in a garage in New York City. Along the way he must deal with other outlaw drivers and the mafia who are out to stop him from winning.  Carradine's brother, Robert, also stars in the film.

Notice in the ad that the 55 speed limit sign is used in the middle.  This would be done again in the ad for
The Cannonball Run four years later.