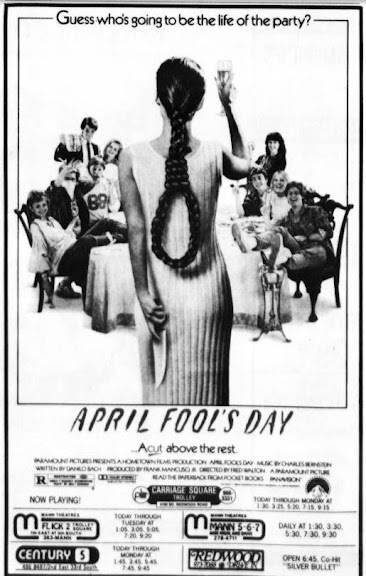 Happy April Fool's Day! Here's an ad for the 1986 horror movie, April Fool's Day. It stars Deborah Foreman as Muffy St John who invites 8 people to her island mansion to spend the night. At dinner, the attendees discover each other's secrets and suddenly they start dying off one by one.  It's a cross between Clue and Agatha Christie's And Then There Were None.

This movie is pretty good. I enjoyed it when it was released on video. I even had the poster on my wall growing up. The star, the adorable Deborah Foreman, has been in a ton of stuff including Valley Girl, Real Genius, Family Ties, My Chauffeur and TJ Hooker. Also in this movie was Griffin O'Neal (The Wraith) and Thomas F Wilson (Biff from Back to the Future).