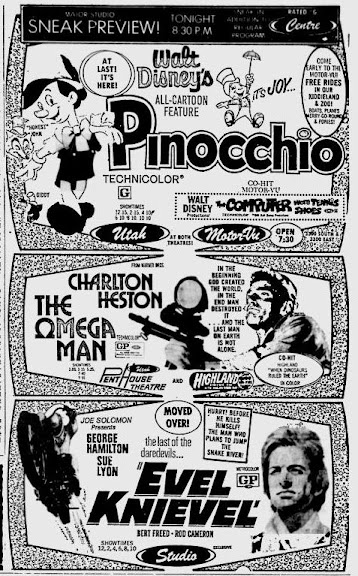 Chuck Heston week was really last week.  However, last Friday was April Fool's Day so I felt I had to post the April Fool's Day ad.  So, better late than never, here's an awesome triple feature ad featuring another Heston classic, Omega Man. Omega Man was an adaptation of Richard Matheson's novel I Am Legend.

Also on this advertisement you'll see an ad for Disney's Pinocchio which turned 31 in 1971.  On the bottom you'll see the movie Evel Knievel starring George Hamilton as the titular daredevil.  Evel Knievel was a biographical movie about the daredevil filmed primarily in his hometown of Butte, Montana.  It should not be confused with the unbelievably awesome Viva Knievel! movie from 1977 that starred the real life Evel Knievel.