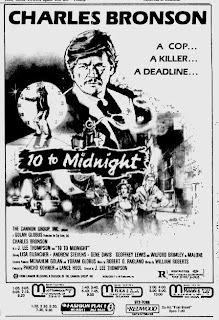 Looking at Charles Bronson movies this week. Today is a 1983 ad for Bronson's thriller, 10 to Midnight.

There's a serial killer running loose that likes to kill his victims in the nude (both he and the victims are nude).  Bronson plays a cop who plants fake evidence to capture this killer. The fake evidence is discovered and the killer is released from prison.  The killer gets his revenge by stalking Bronson's daughter.

The title and tag line has zero relevance to the actual story.  There is no "deadline".

Here's the trailer. Beware, there is a small bit of nudity at the beginning.