This week is Charles Bronson week. I'll look at Bronson movies other than his most famous Death Wish series. Because that's too easy. 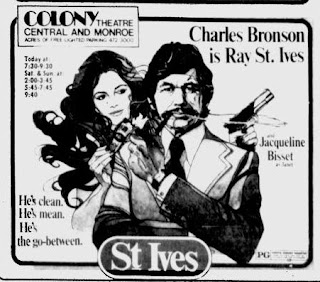 Check out this kick ass ad for St. Ives starring Charles Bronson.  What a great tagline: He's clean.  He's mean.  He's the go-between.  This movie was sort of an homage to old Hollywood noir pictures.

Jeff Goldblum and Robert Englund both have bit parts as hoods in this movie. Goldblum also has a bit part as a hood in Bronson's Death Wish.