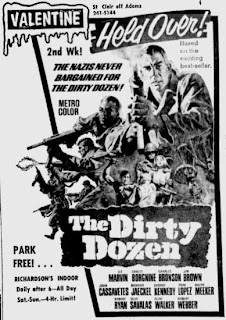 Here is our first Bronson/Marvin coupling in 1967's The Dirty Dozen, one of the greatest action movies of all time. A no nonsense major (Lee Marvin) recruits a group of military prisoners with life sentences for a suicide mission. The film also stars Ernest Borgnine, Jim Brown, John Cassavetes, George Kennedy and Telly Savalas.

This second ad is for 1981's Death Hunt. This movie was Hollywood's depiction of the largest manhunt in Canadian history.