This week we are looking at the films of one Charles Bronson. 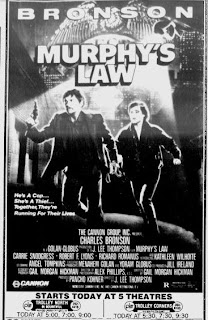 Here's an ad for Bronson's Murphy's Law from 1986. Bronson plays what he plays best, a cop, who is wrongly accused of murdering his ex-wife. He is taken into custody, but escapes while handcuffed to a foul mouthed car thief. Bronson must discover who the real killer is before the police catch up to him.