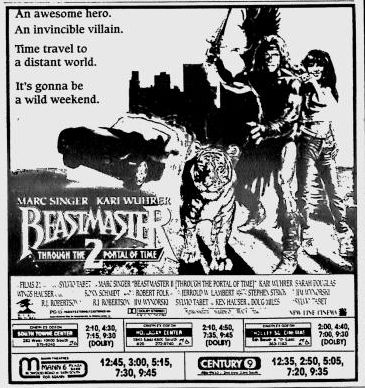 This is the sequel to the 1982 sword and sorcery epic, The Beastmaster. This movie has become infamous for how bad it is. Marc Singer returns as Dar, who is forced to travel through time to present day Earth to stop his evil brother (who he didn't have in the first film) from stealing a nuclear weapon and returning to destroy their native land.

Yes, this movie is every bit as bad as the below trailer would have you believe. It's shocking enough this sequel was greenlit, but they also made a Beastmaster 3. As a TV movie. With Marc Singer.  And it involves another brother we are only now just hearing about.


For grins and giggles, here's 6 minutes of the Beastmaster 3 TV movie: