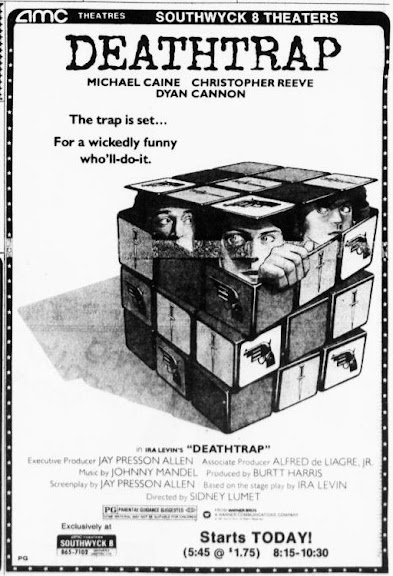 Here's an ad for the thriller Deathtrap starring Michael Caine, Christopher Reeve and Dyan Cannon.  It's directed by Sidney Lumet. Caine plays an aging mystery writer who gets sent a brilliant play by one of his former students (Reeve).  Caine lures the student to his home under the guise of discussing the play but he has every intention of killing the young man and submitting the play as his own.

This is actually a very good movie. Essentially a one set, three act, five character setup with lots of twists and turns. Very fun. And Reeve was at the height of his fame having just finished Superman II and gearing up to film Superman III. He took this job because it had nothing to do with Clark Kent or Superman.