Over on Strange Kid's Club I talk about some of the DVDs released today. Included is a compilation of four Michael J Fox comedies. They are all pretty good so I thought I'd finish out the week with ads for all Michael J Fox movies. 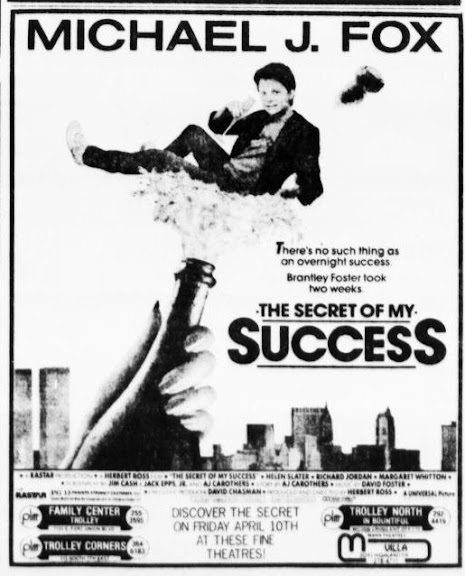 Here's the ad for The Secret of My Success which is included on the aforementioned DVD collection.  Michael J Fox plays Brantley Foster.  A well educated kid from Kansas who moves to New York to make it big.  When he finds it hard to get a job, he visits his uncle who happens to be CEO of a major corporation.  His uncle gives him a spot in the mail room.  Brantley falls for a beautiful executive and decides to pose as an executive to woo her.  Oh, and while wooing the executive, Brantley starts having sex with his aunt.

This is actually a pretty funny movie.  Michael J Fox is charming as ever and his aunt is ballsy and hilarious.  The movie is also populated with TONS of 80s actors like SuperGirl herself, Helen Slater.  Fox's aunt is played by Margaret Whitton who played the evil Indians owner Rachel Phelps in Major League.  You'll also see Christopher Murney who played Eddie Arcadian in The Last Dragon and Fred Gwynne who was Herman Munster in The Munsters and the judge in My Cousin Vinny.  Finally, in the opening credit sequence you see four models turn their heads rapidly.  Cindy Crawford is the third model to turn her head.

Email ThisBlogThis!Share to TwitterShare to FacebookShare to Pinterest
Labels: 1987, comedy, Helen Slater, Michael J Fox, The Secret of My Success