Double Feature Friday: Duel in the Sun and Lust in the Dust

Finishing western week with a double feature of movie ads.

Duel in the Sun from 1946 (this ad, however, is from a re-release in 1954) stars Jennifer Jones, Gregory Peck, Walter Huston, Lionel Barrymore, Butterfly McQueen and Harry Carey (not that Harry Carey).  Jennifer Jones plays half-breed Pearl Chavez who moves to a distant relative's ranch in Texas after her father is hanged for killing her unfaithful mother and lover.  At the ranch, Pearl butts heads with the ranch owner and scandalously entertains the attentions of his womanizing younger son, Lewt. The movie garnered the nickname "Lust in the Dust" for it's highly sexualized characterizations of Pearl and Lewt's relationship.

This movie was produced and sometimes directed by David O Selznik.  He envisioned it as a big budget, hugely epic western in the same vein as his previous Gone with the Wind.  He got his way as production delays and the hiring/firing of 7 different directors caused the movie's run time to balloon up to 26 hours and the production cost to reach a then unheard of $6 million. 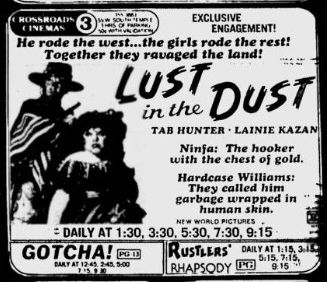 Lust in the Dust from 1985 was a cheesy comedy western. It starred Tab Hunter, Divine and Cesar Romero.  John Waters was originally asked to direct but he turned it down because he didn't write the script.  The movie took its title from Duel in the Sun's tongue-in-cheek production nickname.  The movie is about a bunch of unscrupulous characters searching for buried treasure in the old west.

Take a look at the hilarious taglines in this ad.  Ninfa: The hooker with the chest of gold.  Hardcase Williams: They called him garbage wrapped in human skin.  I think those get across the tone of the movie quite nicely.

If you look under Lust in the Dust, you'll see also playing is Rustler's Rhapsody, which is another comedy western and one of my favorites. However, I didn't get to that ad this week.  Some other time.

Watch the 1946 trailer for Duel in the Sun


Watch the 1985 trailer for Lust in the Dust

Email ThisBlogThis!Share to TwitterShare to FacebookShare to Pinterest
Labels: 1946, 1985, Double Feature Friday, Duel in the Sun, Gregory Peck, Lust in the Dust, western