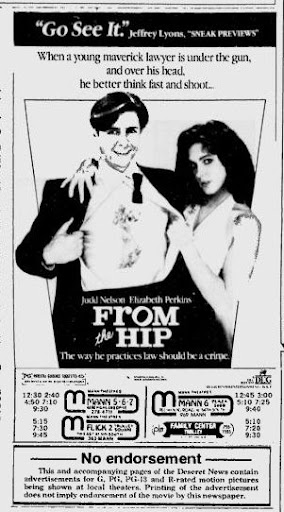 Here's the ad for From the Hip starring Judd Nelson, Elizabeth Perkins, John Hurt, Ray Walston and David Allen Grier.  This movie was written by David E Kelly who is famous for creating Ally McBeal, LA Law, The Practice and Doogie Howser, MD.  It was directed by Bob Clark who is famous for directing Porky's and A Christmas Story.

Judd Nelson stars as Robin "Stormy" Weathers, a lawyer that uses over the top theatrics to win cases. His antics get him a promotion at his firm and the job of defending a school teacher accused of murder. Should he he play it by the book or continue his unorthodox behavior to win the case?