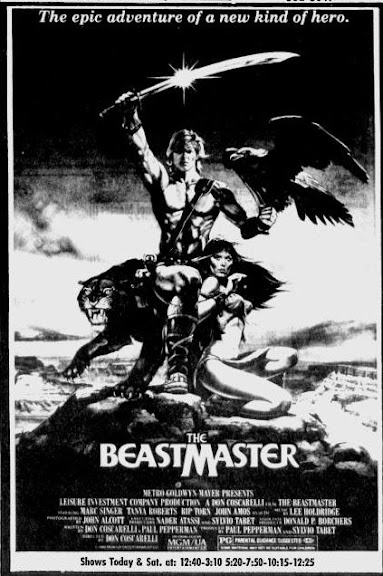 Here is an ad for the 1982 fantasy classic, The Beatmaster. It starred Marc Singer, Tanya Roberts, John Amos and Rip Torn.

Singer played Dar, the son of a king who is hidden at birth from a bloodthirsty priest who killed the king to usurp the throne. When he is grown, Dar discovers he has the ability to communicate directly with animals and begins a journey to avenge his father's death.

This movie has become a sensation on cable TV. It has produced a "dubious in quality" sequel as well as a "not half bad" TV series focusing on the further exploits of Dar. Marc Singer did appear in the Beastmaster sequel as Dar, as well as make a few guest appearances on the TV show.