Over on Strange Kid's Club I talk about some of the DVDs released this week. Included is a compilation of four Michael J Fox comedies. They are all pretty good so I thought I'd finish out the week with ads for all Michael J Fox movies. 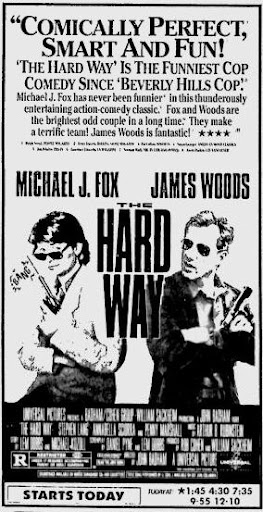 Here is the ad for The Hard Way starring Michael J Fox and James Woods. Fox plays movie star Nick Lange who wants to branch out into police dramas. He decides to follow around NY police detective John Moss to "learn the ropes". Hijinks ensue.

I love both of these guys. Woods and Fox are both fantastic and I just enjoy watching this movie. Yes it's cliche, but the actors make it work.


Fox's character stars in a popular movie, The Smoking Gunn, in which he plays supercop Joe Gunn. Watch the fake in-movie trailer for Smoking Gunn II below: