I've been reading a bunch of westerns lately, so I'm in a western mood. This week is going to be western week. 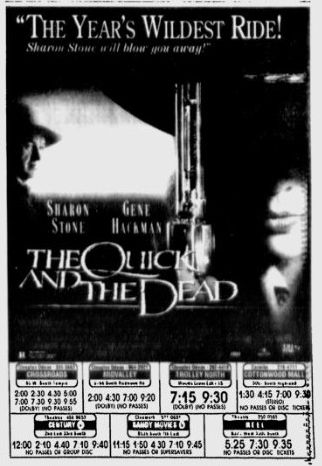 Here's an ad for The Quick and the Dead from 1995. It was directed by Sam Raimi and starred Gene Hackman, Sharon Stone, Russell Crowe, Leonardo DiCaprio with appearances by Lance Henrickson, Keith David, Tobin Bell, Gary Sinise and Pat Hingle.

Sharon Stone is ostensibly the star of the movie, however she's the least interesting character  as well as the worst acted.  When you watch this movie you watch it for Gene Hackman, Russell Crowe and Leonardo DiCaprio.  It's amazing and one of my favorites.

Watch the Quick and the Dead trailer: