Double Feature Friday: Seems Like Old Times and 9 to 5 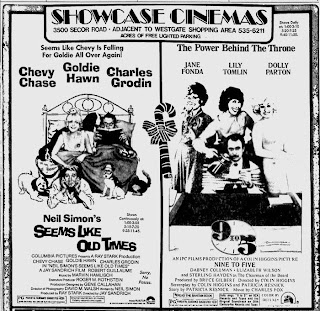 The first movie on the left is Seems like Old Times which starred Chevy Chase, Goldie Hawn, Charles Grodin and Robert Guillaume.  Chase plays Hawn's writer ex-husband who is kidnapped and forced to rob a bank.  He seeks the help of Hawn who is a public defender and the current wife of an attorney.  Hijinks and hilarity ensue.  It is actually a pretty funny movie featuring classic Chevy Chase one liners.

On the right is 9 to 5 starring Dolly Parton, Lily Tomlin, Jane Fonda and Dabney Coleman.  I think everyone knows what this movie is about by now.  Coleman plays the sexist, egotistical, lying, hypocritical bigot boss and Jane, Lily and Dolly his underlings.  They hatch a scheme to trap Coleman in his house and take over the company.  When they do, productivity and sales soar.  But how long can they keep it up?